Details of recruitment advertising in CJS Weekly during 2020

Unsurprisingly numbers in all sectors are significantly lower than in previous years.  However, there were still 1177 adverts posted through the year, 498 before the lockdown and 679 since.  During April we published only 12 adverts across all four editions. Until the pandemic, in 25 years of producing CJS Weekly we'd never published editions with just two adverts, but last year was a record setter in all sorts of ways we'd rather forget. 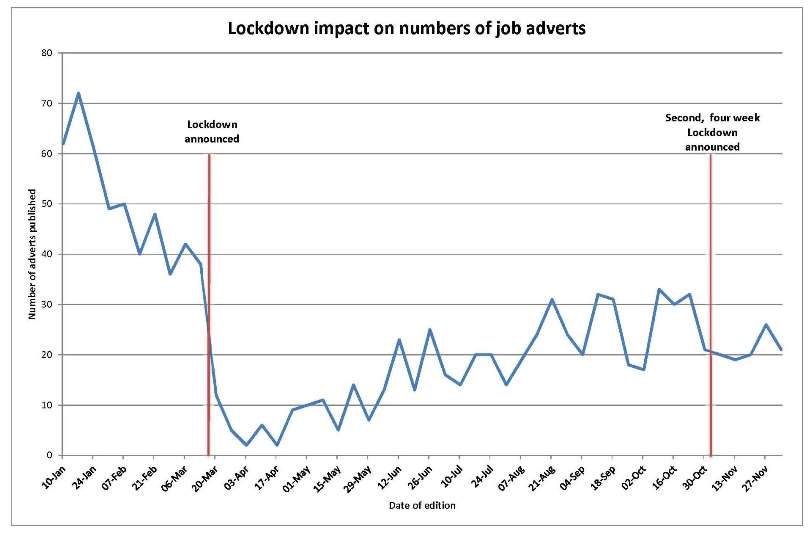 A direct comparison of number of vacancies advertised in previous years is not going to tell us much other than numbers are down across the board.  However, the percentage breakdown across various job type categories tells a different story and presents a reflection of what's happened in the last nine months.  Although the actual number of vacancies was less than in 2019 the proportion of countryside management vacancies was slightly increased in all specialities, rangers to rights of way and arboriculture; policy making and advice saw the largest proportional increase and only a slight reduction in the number of available jobs.  The number of ecology and biodiversity roles available remained constant leading to an increased proportion of vacancies. Unsurprisingly environmental education and outdoor adventure activity jobs saw significant falls in both numbers available and proportion of total.   One disheartening statistic is seen in the number of trainee roles which have more than halved, we must hope that numbers will increase with a green recovery and the launch of various Government schemes.

The geographic split of vacancies this year was roughly the same as previous but for the first time we saw adverts that simply stated working from home and no location specified; there were also many more that stated location flexible again often mentioning working from home, at least for the lockdown period with arrangements after that to be agreed.

Looking to a brighter future

On a brighter note even though we are currently in the third lockdown the number of adverts published in the first three editions of 2021 is comparable with previous years; 158 in 2021 in comparison with 195 in 2020 and 150 in 2019.  Another favourable indicator is a significant increase in the number of adverts for trainee and apprenticeships roles, 20 this year up from only 5 in 2019.

You can find the full 2020 breakdown of vacancies by job category, region and contract type plus adverts by job role on the website.