Skip to main content
Labels
Posted by Kerryn May 20, 2020

“If the bee disappears from the surface of the earth, man would have no more than four years to live,” Albert Einstein

To raise awareness of the importance of pollinators, the threats they face and their contribution to sustainable development, the UN designated 20 May as World Bee Day.
The goal is to strengthen measures aimed at protecting bees and other pollinators, which would significantly contribute to solving problems related to the global food supply and eliminate hunger in developing countries. More on the UN's World Bee Day here. 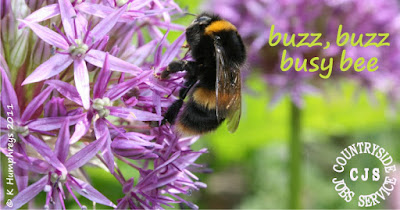 Beewalks
Bumblebee Conservation Trust is working to protect our bumblebees which requires a good understanding of what’s happening to all of our species, from the rarest to the most common. To gather this information, the Bumblebee Conservation Trust established the national bumblebee monitoring scheme; BeeWalk. Data received during 2019 from the volunteer beewalkers was due for publication in a report this Spring, but it's one of the many projects put on hold during the coronavirus outbreak, BBCT hope to have the results collated and produce the report later this year, however as of early March BeeWalk had received 151,233 validated records of 23 bumblebee species, that’s 480,113 individual bees!  This year's beewalks are also on hold but you can still help out by reporting sightings. Find out more about the scheme in this article written for us by Helen Dickinson, Bumblebee Conservation Trust Surveys Officer.

What's the last thing that goes through a bees mind when it hits your windscreen? its buff-tail! *groan* Sorry! But splatted insects are a useful guide to current number.
A national survey using a standardised sampling grid termed a ‘splatometer’, was led by RSPB in 2004 where  members of the public were asked to record the number of insects and other invertebrates squashed on the number plate of their car, having first cleaned the number plate before commencing a journey. Kent Wildlife Trust repeated the survey across Kent in 2019 are were able to compare the abundance of invertebrates at these points in time. The results show a worrying decreased spat density indicating 50% fewer insects.
Read more about the survey and the results in this article from Dr Paul Tinsley-Marshall, Conservation Evidence Manager, Kent Wildlife Trust.

Devastating insect loss
These sorts of results are being observed in countless reports and studies from across the world, some even predict 41% of insect species could be extinct by 2050 without urgent action now. With this in mind Buglife launched the No Insectinction Campaign calling on global decision makers to reverse the declines through a series of measures.
Buglife believe there should be sustainable populations of all insects. No Insectinction is Buglife’s response to the current crisis – a prescription for healing our planet, by restoring our depleted and devastated insect populations. We can stop and reverse the global declines in our insects, but only if everyone pulls together to do their bit.  Read more.

Stop press update from BBCT:
If you live in England, you can now carry out BeeWalk surveys, you can walk your transect alone or with members of your own household, staying at least 2 meters away from anyone else.
The advice for Wales and Scotland remains as follows: You should not carry out a BeeWalk unless you can do so without leaving your property.
Your health, and the health of those around you, is more important than bumblebee recording and you should not do anything to put it at risk.
Email Post
Labels: bees bumblebee insect UN International Days world bee day