Lets start with the messages.
Our IT gremlins have been at it again, the gremlin wrangler came and evicted the elephants, which as it turns out were totally fictitious - would you believe it?  The server actually had loads of space, it wasn't filled by large-eared pachyderms but the gremlins were sending mixed messages.  So now the memory bars are green again and there is lots of space. Not best pleased with the turn of events the gremlins had one last hurrah, as their herd of ghostly elephants stampeded out of the building they broke a rather vital cable meaning that on Tuesday the office server was accessible if you were anywhere other than in the office standing right next to it. Once the cable was replaced the network was complete again and everything worked.
Message two, was rather garbled.  On Tuesday evening someone left a message on the answerphone, we're assuming it was from a mobile because only half of each word was decipherable.  So if you phoned us on Tuesday and you've got the numbers 544 in the middle of your phone number, sorry we didn't get back to you but that was about all that was legible.  Lesson for everyone, make sure you're in an area of OK reception (I won't say good because ours is pretty awful!) and that you leave a nice clear message; and if you don't hear from us try again!
Third message, is a repeated, "it's time to change your password" one from BT.  For years we've used a btinternet address to contact subscribers, send your weekly edition and let you know it's time to renew your subscription.  However, since BT decided to part ways with Yahoo every week we get multiple failures and messages to change the password; apparently the new and improved (doesn't that just make your spirits sink?) BT system will only let you log in on any one device at any one time, so if you use your phone and your laptop to check your emails it will cause problems.  For us it's the bulk mailer and the main email mailbox which collects from several accounts before sending them onward again.  After a month of this and no solution in sight we're looking to change the email address we use.  So far we've not decided which provider to use but when we do we will let everyone know of the change so that you can add the new one to your safe lists.  And if you're having problems with any BT email address the best advice, apparently, is only to use their webmail programme (and get bombarded with adverts...! no hidden agenda there then?).

Season of mist and mellow fruitfulness.
Not quite got to the fruitfulness yet although the plum and apple trees are looking promising and AW's gooseberries are doing very well.  However, Tuesday morning was a beautiful misty morning and the garden was festooned with cobwebs all glistening with dew. 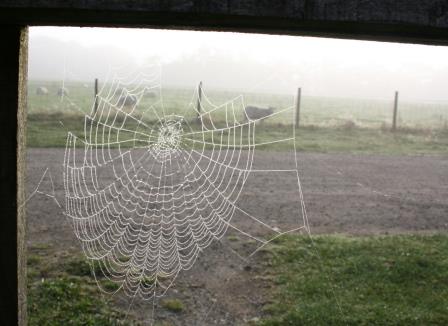 And what about those craneflies?  I didn't see many leatherjackets earlier in the year when I was gardening but the number of adults now flying is incredible. we're evicting a dozen at a time, several times every day.  AW wants to know what is the point of those stupidly long, fragile legs that drop off at the merest touch?  From the survival rates and population boom it would appear that stupidly long legs are a successful strategy, my guess is predator evasion, any others?
And while we're thinking of predators, on Wednesday evening, there sitting on top of one of the colonnade poles was a very fluffy tawny owl, a few poles over from last year's visitor. No photos this year because it was already dark and he flew off as soon as he saw our faces at the window, he's been back on the wires and next door's roof but so far not back on the poles, or at least not that we've seen.
Back to the office and the latest edition of CJS Weekly has gone to press, the first of September, this week there are 11 pages with 28 ads for paid posts plus 11 for voluntary ones.  Digital editions are on route.