More on owls - And Finally

it stopped raining, the land dried up, the sun came out and so did the tractors. Over the last week virtually every field in Goathland has been cut for hay or silage; farmers and contractors working until the early hours to get it all in before the rain returned (last night).  The field in front of us was cut in two phases and Finnegan watched the operations carefully his huge head swaying back and forth as he tracked the vehicle's progress.  Cutting was fine, making the big round bales was fascinating but when the loader arrived and started stealing his bales it had to be told in no uncertain terms that theft was not permitted and he was telling the world all about it - at high volume!  I think he finally got to grips with around the thirtieth bale, or perhaps they were just further across the field and he didn't consider them 'his'.  Foolish hound!
It was almost nice to hear his great baying bark  - only 'almost' because he was a little too enthusiastic.  The dogs (and office) have been subdued this week because last week boss dog Juno died at the grand age of 15.  We've put a bit about her on Hebe's blog, read it here.

Do you see what I see? 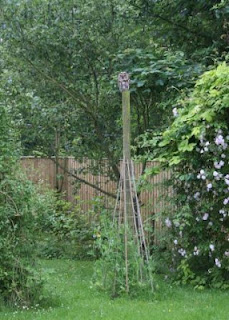 Top of the pole - yes, here she is in the middle of the garden at 6:30 one evening this past week. 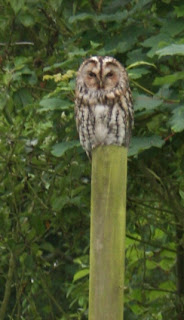 This is "fat wol" who is slightly larger than "thin wol" so we're guessing she's a she.
Barmy bird, I suppose she fancied a different perch and because it wasn't raining she could come out from under the eaves - and get a better look at the martins.... But so far no more martin predation.


And finally: CJS Weekly has gone to press, digital editions are on their way.  This week it's 13 pages with 36 new paid posts of which 30 came direct to CJS, lots of news and details of next month's practical work days and conservation tasks.