Autumn is no longer waiting in the wings, it's marching towards the proscenium.
The swifts have not been seen or heard since Tuesday so we think they have gone.  The rowan berries are turning and yesterday morning I heard a robin tuning up.

Thinking of rowans this is my poor four year old sapling, waiting to be planted later this year (I hope), by the drive gate of course. 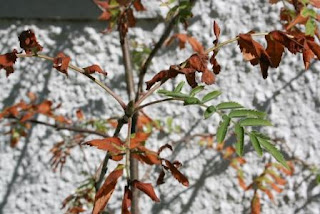 The sapling is in a large tree tub but during the hot weather last month despite copious quantities of water it got well an truly scorched - I should have covered it - I thought I'd lost it when all the scorched leaves crisped up and mostly fell off.  But nature is wonderful and it's survived putting out new leaves.  I'll make sure it's well fed to build back up the reserves used in new leaf buds and if necessary we'll give it some additional protection this winter.
The little seedling in only its second summer fared even worse and ended up as a twig in a pot but has recovered even more spectacularly. 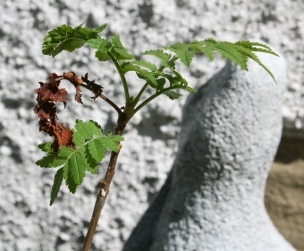 It will be treated to a  winter in the unheated greenhouse, pot sunk in a tray of polystyrene beads (that surplus packaging does come in useful sometimes) to prevent freezing solid.

It's show season, the village Flower and Vegetable show was last week and although entries were significantly lower than previous years the atmosphere was friendly and everyone had a good time.  Unfortunately HB didn't retain her crown (or trophy) as baking queen, being surpassed by Master B when his chocolate cake was judged to be better than Mum's. Although the household still has a trophy, Miss B won the cup for the most number of points awarded in her age group.  Mr W came home with three trophies, for the most points for flowers, the best veg and the show stopping dahlia.  Miss India W's sunflower had the largest flower head, although the prize for the tallest sunflower went elsewhere despite high (sorry) hopes.  HB has come back to work for a rest after a week of show preparations!
As usual we're all having a day off next week, on Wednesday, to attend the Egton Horse and Agricultural Show, but we will be in on August Bank Holiday Monday 26, if slightly fewer in number than usual.

The new 'Team Members', Office Puppies Dido and Hester are settling in well but do find a full day at work rather tiring:

and on that note we think it must be nearly bedtime...

(PS: Monday's weekly has gone print, with the October Calendar of Training Courses, plus 43 job ads and 6 more for volunteers on 16 pages.)