If someone says heritage and monuments what do you think of?

Museums, statues and big old buildings probably but in reality it actually encompasses much more and to make people aware of this this year's World Heritage Day has the theme of rural landscapes.
World Heritage Day was established in 1982 as the International Day for Monuments and Sites and approved by UESCO the following year, it's a day to celebrate and promote cultural heritage, to raise awareness of its diversity, relevance and vulnerability.  By focusing on rural landscapes the organisers are aiming to raise awareness of landscapes in general and specifically the challenges faced in their conservation and ongoing management.
More about this awareness day here. 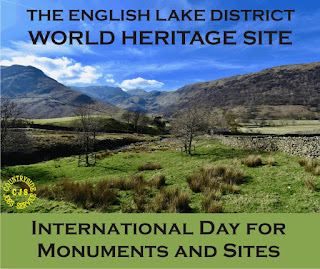 The English Lake District (to give it its UNESCO title) was designated in 2017 for both the marvellous agro-pastoral land-use system and the cultural significance of the landscape and buildings by artists over the years.  UNESO describes it as: "Located in northwest England, the English Lake District is a mountainous area, whose valleys have been modelled by glaciers in the Ice Age and subsequently shaped by an agro-pastoral land-use system characterized by fields enclosed by walls. The combined work of nature and human activity has produced a harmonious landscape in which the mountains are mirrored in the lakes. Grand houses, gardens and parks have been purposely created to enhance the landscape’s beauty. This landscape was greatly appreciated from the 18th century onwards by the Picturesque and later Romantic movements, which celebrated it in paintings, drawings and words. It also inspired an awareness of the importance of beautiful landscapes and triggered early efforts to preserve them." (Description is available under license CC-BY-SA IGO 3.0 ).
Useful links:

Hadrian's Wall
North east from the Lakes you'll find Northumberland National Park home to the magnificent feat of engineering that is Hadrian's Wall one three sections of Frontiers of the Roman Empire, the other two being the Antonine Wall running across central Scotland from the River Forth to the River Clyde and The Upper German-Raetian Limes in Germany. They have been designated because they exhibit an important interchange of human and cultural values at the apogee of the Roman Empire but with the Rural Landscape them this year Hadrian's Wall comes into particular focus with about four fifths of the line runs through open country.  You can walk the route of the wall, all 84 miles from coast to coast along the Hadrian's Wall Path national trail, more here: https://www.nationaltrail.co.uk/hadrians-wall-path.
Useful links:

Our final pick for today is one closer to CJS's home.
Studley Royal Park including the Ruins of Fountains Abbey located in Ripon on the edge of the Yorkshire Dales National Park. It was one of the first sites in the UK to become a World Heritage Site in 1986 because the landscape is of exceptional merit and beauty represents over 800 years of human ambition, design and achievement. It's a huge responsibility to own and manage such important sites and the National Trust who own this one (and sites along Hadrian's Wall too!) explain some of the complexities of managing such sites and outline their management plans in a series of downloadable documents.
Useful links:

Britain has 31 designated sites ranging from the Giant's Causeway to the City of Bath, see them all here.
Email Post
Labels: discover national parks International Day for Monuments and Sites World Heritage Day