Wolf-e-what??
OK so this one is not really anything to do with CJS other than the Office Dog connection because it boils down to Christmas for dogs! And there's no way they're going to let that one pass without a yelp.

Earlier this year like many other people I was meandering through my social media passing (wasting) a minute (or hour or two) and there in my feed was a post about this new holiday Wolfenoot created by a 7 year old boy from Hamilton, New Zealand, it read: " My son has invented a holiday called Wolfenoot. It is when the Spirit of the Wolf brings and hides small gifts around the house for everyone. People who have, have had, or are kind to dogs get better gifts than anyone else. You eat roast meat (because wolves eat meat) and cake decorated like a full moon. A holiday to the spirit of wolves that celebrates people who are kind to dogs?  can 100% get behind this. So we will be celebrating Wolfenoot. It’s on the 23rd November if anyone else is moved to celebrate it.  If you do, please post pics, so he can see how his idea has spread. If you’re posting publicly about it, use #wolfenoot."
So we're having a roast dinner - dogs included (well theirs will be Lily's Kitchen Sunday Lunch but it's basically the same), I have wrapped their toys plus a new one or two in newspaper, stuffed them in boxes and hidden them for them to find. 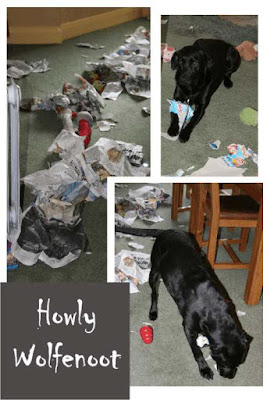 Which they have through enjoyed - look at the state of the floor!

Have a howly Wolfenoot.
(and thanks to Jax for the lovely idea, from office dogs, Dido, Hester and Flora who have had a ripping good time)

Just in case you think I've made this up - see the official website here: https://wolfenoot.com/
Email Post
Labels: wolfenoot