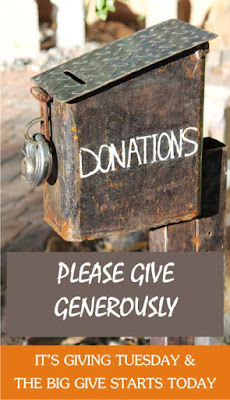 Giving Tuesday is a reaction to excesses of the American Black Friday, it has become an international  movement to create a day of giving at the beginning of the Christmas and holiday season.
Here in the UK it's run by CAF (Charities Aid Foundation) and is a day to do "good stuff for charity". Whether you bake good stuff, make good stuff, donate good stuff, tweet good stuff or even say good stuff ‐ how you support your favourite cause is totally up to you!
And in the run up to Christmas we're all spending lots (too much probably) but by using some of the partner programmes you can raise funds along the way - at no cost to you.  If you shop with Amazon (and who doesn't?) use Amazon Smile and donate with every purchase (some marketplace traders don't participate in the programme) or sign up to Give as you Live and add the Give as you Shop widget to your favourite browser and donate that way and it doesn't cost you a penny - my running total on Give as you Live is over £450, I'll trigger an extra donation when I reach £500.  If you're in a real shop use a charity card to pay or drop your change in one of the charity boxes.
Find out about Giving Tuesday here.

Today is also the first day of the Big Give Christmas Challenge which runs until Tuesday 4 December when your donation to participating charities can be doubled.  It is the UK's biggest online match funding campaign. Since 2008, the Big Give has helped raise over £98 million for thousands of charities through match funding.
Charities have to nominate a specific project to take part, this year there are 41 listed under the environment heading including some familiar such as Butterfly Conservation's hairstreaks project and Hebridean Whale & Dolphin Trust, others not so much for example the Impact Trust which is looking for funding for their Equipping Youth To Be Resilient Leaders project.
There's an animals category too which lists 22 projects however some of them cross over such as Keep Britain Tidy : Preventing small mammal deaths
All are worthy causes so if you're thinking of making a donation this Christmas why not pick one of these and double your impact.
Donate here now.  Or for more about the Big Give here.