Skip to main content
Labels
Posted by Kerryn May 10, 2019

No, we're not just listing names of birds or gone cuckoo - although that's one too.  They're all migratory birds that spend their summers or winters here in the UK.  Who doesn't delight in sighting the first swallow or hearing the first cuckoo heralding summer isn't too far away or marvel at the flocks of redwing stripping the hedges of berries as winter approaches (and thinks leave me some holly berries for the wreath - please). 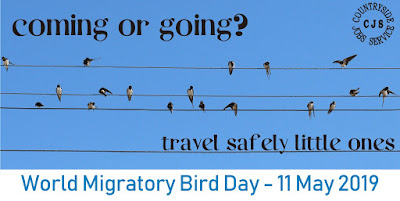 It's an incredible life strategy to travel half way around the world to breed and I often wonder how such extreme behaviour patterns came to be evolutionarily successful, I mean couldn't a cuckoo find a similar small song bird's nest closer to their African home to parasitise? And the little house martins endure such long journeys travelling non-stop just to return to the muddy cup that is their nest stuck to the wall above my sitting room window and then working so hard all summer to raise one or two broods which they then leave behind to fatten up and let them make their own way across the continents to winter in the sunshine.  Which is their home? Here where they breed or there where they live and grow?  BTO have been tracking 'our' cuckoos since 2011 and in that time we've learnt much about where they go and the routes they follow to get back to us all the way from Africa.

They face many dangers on their journeys and on this World Migratory Bird Day (tomorrow 11 May) the organisers are highlighting the scourge of our age: plastic by giving this year's days (a second day will be on 12 October) the theme: “Protect Birds: Be the Solution to Plastic Pollution!” The day is organised by The Convention on Migratory Species, the African-Eurasian Waterbird Agreement and Environment for the Americas as an annual campaign to raise awareness of the need for the conservation of migratory birds and their habitats, pointing out the threats faced and ecological importance of migratory birds.  They are asking people to: "Join the global campaign and help raise awareness by organizing educational programmes, lectures, beach- and riverside clean-ups, visits to bird-watching sites, competitions, art exhibitions and other public events."
Find out more on the website: www.worldmigratorybirdday.org