Following on from last week's conker problem or more precisely the lack of conkers problem a new philosophical debate has been in progress and so far no side has 'won'. 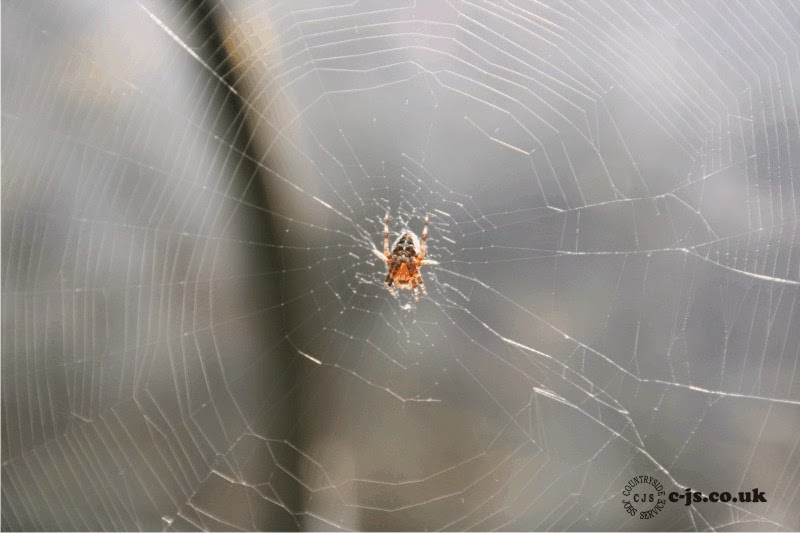 If, due the aforementioned shortage of conkers, you can't dissuade the spiders from entering or setting up house (web) in your home what's the best thing to do?
I favour the eviction route, carefully shepherding them out of the nearest window, usually to a background chorus of "no, it'll only come back when you're not looking".  However, it's been pointed out that this might not be very kind, turning out a poor unsuspecting Sid into the the cold, possibly wet, dark night (yes, it's usually night-time when they make their present felt isn't it) to fall two storeys to the hard concrete or soggy grass below.  Not to mention the stress of being caught or trapped and then tossed aside.
So perhaps it's best simply to leave them be and to remove any offending webs? But then again our eight-legged friend has spent many hours carefully constructing their webby home and to thoughtlessly destroy it could be even less kind than the eviction route and maybe even worse because of the additional energy and resources our arachnid will have to expend creating a new one.
Which leaves us with the arachnaphobe's favourite of all out extermination. Swift, decisive, low stress (to spider and person - apparently) and permanent.
Alternatively I could try the 'spiders are actually very nice' approach and change points of view.  It worked on moths (look at the lovely furry body, and those fantastic antenna, this one is a 'Mr' moth with the feathery ones and, wow, such wonderful wing colours) and to a lesser extent on craneflies (look, it's not a spider, it's only got six legs, oh,dear,- they fall off, this one only has five now - go on grab a daddy long legs and turn it out). Any ideas for 10 reasons why spiders are wonderful and should be welcomed? or am I fighting a losing battle, according to news from The Telegraph arachnophobia is all down your ancestry.

So onto other nature news.
On Wednesday an osprey passed by on its way south, a very rare occurrence for us and certainly note worthy. It was just above the moor (opposite the office) circling on thermals gaining height and not in slightest bit bothered by the mobbing corvids and gulls before setting off again with barely a wingflap required.
We've had several hares in the field in the evenings this past week and one evening when the sheep had wandered off the field was alive with rabbits before the local hunting cat meandered through!

Disaster!
Remember Mr W's monster marrow? It was ripening too early due a lack of thermals, well that won't happen again as HB is donating some old-fashioned traditional thick wool long johns from her Gran.  However, it turns out the marrow wasn't just ripening it was in fact rotting inside.  Once this calamity was discovered Mr W harvested it to put into cold store in the hope that it would survive until it could be exhibited at the Harrogate Autumn Show. But it was not to be - as he was carrying the 40+lb fruit down from the veg plot it started pouring out water and began collapsing (only a little but folding inward nevertheless).

And to finish, the usual numbers: CJS Weekly has just gone to press, 16 pages this week, with 47 adverts for paid posts plus five for volunteers.  it also includes the second 2014 edition of CJS Focus on Volunteers - more about that on Monday.