First was Tony the optimistic tortoise, he belongs to the Worley household, part of their eclectic smallholding's menagerie. He did have a partner but he wandered off never to be seen again, the delights of greenhouse were insufficient to hold his attention and he dug out of the border.  Well now it seems that Tony has also taken a liking to escapism. A shuffling and rustling sound came from the room where his raised two storey tortoise table resides (no effort or expense is spared for Worley livestock, they are the only people I know to have potted up dandelions just to feed the animals!!) shortly followed by a thud - Tony had climbed to the top of his table and mountaineered over the edge only to fall to earth landing shell-side down.  Mr W put him back in his table run, only for similar noises to be heard later that night and he had again climbed out, this time he was put to bed and the lights turned out (that stopped him). After discussions it's been decided that the top tier needs a higher boundary wall which will be this weekends project.  His adventures are quite apt as the optimistic, flying tortoise picture was doing the rounds again on twitter this week (see it here if it's not reached you yet).
Next comes the new cat in the neigbourhood, he's called Toby and is a handsome tiger striped tabby with white socks, he's adopted CMH and has taken to following her home.  His owner says he likes having two houses, well he's not moving into ours, Hebe would soon make sure of that and if she failed then I would have to evict him in favour of breathing!  However, he's a hunter cat and is quite amusing to watch stalking through the field, he does favour small rodents above birds; no, he won't wear a collar he simply shreds them before leaving the broken pieces scattered in his wake and keeping him indoors apparently means his household gets no peace so out he goes.  As his adopted second household so far we've had two vole sized gifts left by the gate (he's learning not to venture into the garden, dog patrol is ensuring he remembers too), Dido very carefully picks them up and delicately drops them at my feet as if to say, "OK, Boss, I've found it and brought it - now what?".  We are faring much better than his primary household who receive very regular 'presents' of the, usually dead, furry kind; the other morning his owner came down for breakfast, made a coffee and sat catching up on the TV news before starting on breakfast proper.  Later a flat mouse was found on the sofa - HB is still shivering with revulsion at thought of it.
And last is one of HB's sprollie pups who slid under a gate to gaze at (she promises it was only to gaze and not to investigate more closely and never to chase) the wooly sheep but in doing so also ran into the electric fence. She beat a hasty retreat!

And for the resident arachnaphobe, to help deal with our spider conumdrum partially answering my plea for "ideas for 10 reasons why spiders are wonderful and should be welcomed" OPAL have published a new guide helping identification of common household spiders. Find out more about our eight-legged lodgers here, or download the guide (PDF). 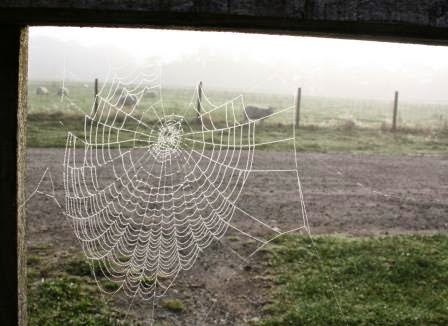 This week the weather has been dire: thick fog every day, and when it rolls out a little it is only replaced by misty, damp, dreich murk all very autumnal particularly the fences and gates festooned with cobwebs decorated with crystalline dew drops, all except for the temperature which has been tropical for the time of year. Last night when I put the dogs out before bed it was 15oC - positively balmy!
Email Post
Labels: autumn fog mouse nature notes pups spiders sprollies toby cat tony the tortoise weather