The Winners.
After over a year we've finally reached the end of the competition.  It's been incredible to see all your wonderful photos and we feel very privileged to have been able to share them with all our readers.
Each month selecting just one winner seemed to become ever more difficult so picking just one winner from all the entries was a huge undertaking, after narrowing it down to a shortlist of seven we ended up voting for first and second places using a CJS devised system of proportional representation! Ultimately, there were only two votes between first and second place. 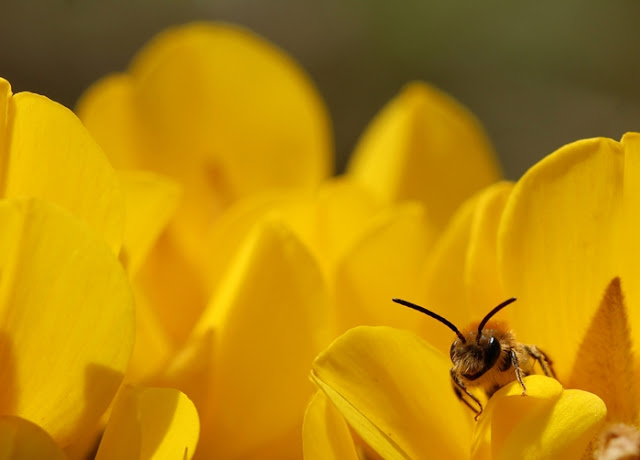 We all agreed the colour of the gorse flower was eye catching and harmonised nicely with the slightly darker honeyed tomes of the bee, perfect placed in the corner of the image with every detail clearly visible.
Marco said:  I was visiting a local nature reserve to birdwatch and gather some invertebrate records, and I took a number of photographs to assist with any identification issues (I have a personal no-kill policy, hence the photos). I noticed a number of solitary bees (Andrena haemorrhoa) flying around a particular gorse bush, so stood for a while to get some photos, and see if there was anything else to note in this spot." he adds: " I have a preference to show invertebrates in their natural surroundings, giving a brief glimpse into their short, busy, but incredibly important lives. A second later, the bee had flown again. It's a relatively simple image which I hope does convey this to some extent."

Runner up goes to Val Gall's photo of the red stag wading up a burn. 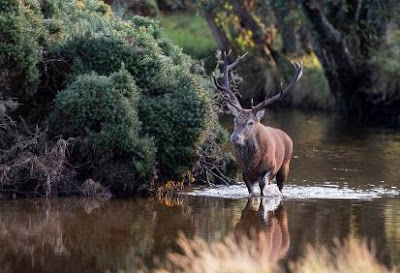 When we awarded Val first place back in October for the Wildlife Theme we said: The red stag is a beautifully balanced, perfectly composed and in focus image. Every hair is visible, the texture of the antlers and the spikiness of the gorse, even the water running down the lifted stepping foreleg which together with the disrupted reflection in the water below all come together to create a sense of movement in what is a quite serene image.
Val was "over the moon to have second place" and says: “I was watching a dipper feeding on the edge of water when I heard splashing to my right. A beautiful red deer stag was walking through water heading straight towards me. A very precious moment”. 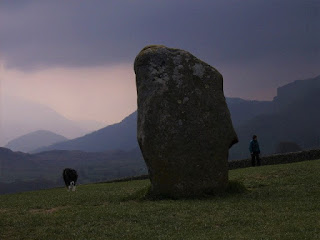 Lakeland Summer by John Jones
CJS said this is such an atmospheric image and captures a "typical" Lakeland summers day very well!  The photo is beautifully balanced with the walker and collie on either side of the standing stone, both braced against the wind and the distant fells a moody purple. 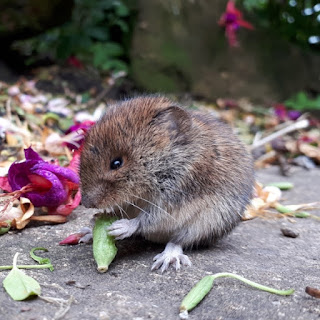 CJS said: Another great photo, once again in perfect focus from the little paws to every hair and whisker, the russet brown of the vole's fur is somehow made more intense by the bright fallen flowers which also illustrate just how small a creature it is. Adrian says: "the picture wasn’t taken with anything fancy, just my 5 year old Samsung Galaxy Smartphone.  I enjoy getting out for walks with my camera but always have my phone with me as a standby.  I read somewhere that the best equipment for a photographer is what they have at the time and this was certainly the case." 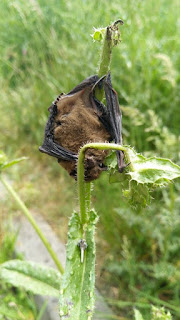 Obviously lots of you have been enjoying the photos, we had hundreds of votes for the readers' choice and from all over the world as it turns out as this comment shows: "So many amazing photographs of wildlife. Hard to choose from such talented photographers. An eye opener for me as a New Zealander, how many beautiful creatures the UK has. Enjoying the solo bat."
By a significant margin the clear winner is the lovely daytime pipistrelle by Kim Bliss.

Kim says she's: "happy to share this of a pipestrelle bat I found resting at Tilgate Park, woodland in Crawley, West Sussex. It was a rare find that made my day, especially when he had flown at dusk safely! ( I hope!)"

The comments show how much this most unusual sight appeals:
Amazing picture and never seen a bat in the daylight.

The photographer must be very observant to have captured this shot. How wonderful to find a pipistrelle slumbering & looking so comfortable.
Beautiful photograph of a rarely seen bat, In daylight too, very impressive, what a great photographer

It's been an eye opening year for us looking at all your marvellous images and we hope it has is some way illustrated the depth and complexity of working in the countryside. One reader's choice voter comment sums up the completion better than we could: "Well done all. Stunning Images of our natural world and the dangers our wildlife faces and the severe environmental Issues that we must all address before it's too late"
Full size images are on our website.
Email Post
Labels: #CJS25Photos Photography Competition Photography Competition winners