This week's edition of CJS Weekly has the first advance Christmas warning, there are only three more editions to go this year! Which means that I haven't been entirely wasting my time designing Christmas cards and updating various "It's Christmas, we're closed" notices.
AW has been busy putting together our latest Focus edition, of which more on Monday, but Weekly readers know that you receive your copy with Monday's edition, 10 pages this week, plus a further 21 with the Focus.  it seem that we're in the pre-Christmas slow down with only 18 adverts for paid post plus 11 for volunteers in this edition - assuming we follow patterns in previous years it will pick up again in a week or so when closing dates will be in the New Year.  It has gone online, paper copies are printing and emails should land soon. 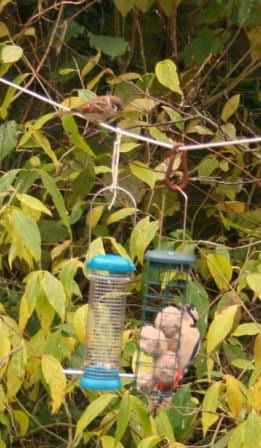 The weather has been unseasonably warm this last week which may account for the catkins on the hazel and alders.  However, the bird feeders have been busy with the usual crowd including a growing a number of tree sparrows but this week we have had our first brambling of the winter and a new species for us, in the garden at least, a male yellowhammer was happily tucking into the finch mix.  A greater spotted woodpecker is becoming a regular occasional (if that's not tautology) visitor and once again was battering the feeders, having eaten all the peanuts he was attacking the fat feeder leaving the tree sparrow to look on and wait patiently.

AW's having bird problems of a different sort, their five Christmas turkeys having taken over the garden now have designs on the kitchen - and not in a roasting pan (yet....!) type of way - congregating in the porch and trying to squeeze inside when the door is not quite closed, being rather large and lumbering they're not successful. Apparently they're quite comical to watch waddling about one behind the other but the funniest is when they decide to chase Bill the sheepdog who's watching over them, they've not quite managed to nip his tail but one day and, if she can stop laughing at them, AW might just get us a video.
Keeping with the livestock theme, TB's little goats are settling in well and beginning to follow her around the yard, eating from a held bucket but not yet ready to be touched.  They had quite a show today when she discovered that her pocket has a hole in it and the key to the yard gate had fallen out, why is when the gate won't open you forget about three things that you normally take with you without thinking about?  So lots of gate clambering was required, made slightly more problematic by the small gauge wire net on the yard side to stop chickens and little goats getting out meaning there's no toe hold and the gate has to leapt / hurdled.
Email Post
Labels: Christmas CJS Weekly goats Green End nature notes tree sparrows turkeys woodpecker