its colours, although according to the Woodland Trust it may be a "fool's gold of an autumn" with 'proper' autumn arriving later.  I have to say it certainly feels and sounds like autumn.  the robins were singing their hearts out this morning and the tawneys although vocal all year are shouting loudly every night.  The weather has changed too with heavy rain, thick fog and high winds bringing down leaves and partially ripened fruit and berries.  I've found three split conker cases all with unripened conkers, no skins or that lovely shiny shell and lots of green acorns but the ash keys are still hanging in huge great bunches from the ends of branches which are sagging under the weight.
I also found a three winged sycamore seed, I've never come across one before and as you can see it's not two stuck together there really are three seeds on one stalk. 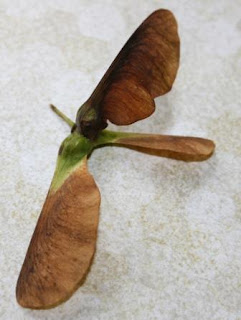 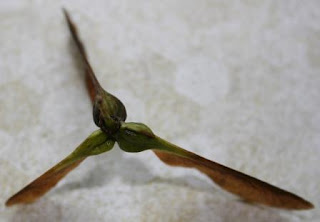 The autumn flower show is on in Harrogate and Mr W has entered his 70+pound, four foot long marrow, he doesn't think it's the heaviest but it's the prettiest (not sure they judge on looks). We'll find out how it does next week, and maybe more importantly how the second best contender fares at the ninth annual Green End Heaviest marrow competition -
and anyone for marrow soup, stuffed marrow, marrow cake....

Been crazy in the office - even more crackers than usual and that's not just down to the office pups! Small problem with email server (now fixed but taking time to deliver all mail), a glitch with the new training directory (more details to follow in due course but for now training is a word uttered with a hiss and scowl), AW's busy putting together the latest Focus edition and her new laptop is now really helping with matters and TB is stressing out about house sales, or the lack of them. On the good news front: the central heating has been fixed.

One weekly edition is more or less online and ready for digital viewers, postal copies will be with you on Monday.  This week there are 14 pages including the November Training Calendar, not many voluntary posts, we're saving those up for next week's Focus but a handful of paid jobs in 29 adverts.
Email Post
Labels: autumn marrow nature notes sycamore weather