A day to look at urban sprawl. 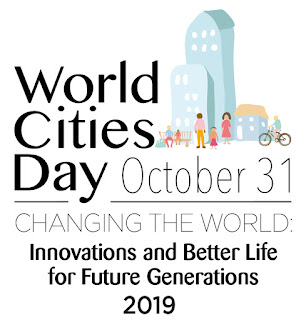 Urbanization is one of the world's most transformative trends. Over half the world's population now live in cities and this number is expected to double within 30 years posing many problems related not only to housing all these people but the implications for the environment, both local and global now and in the future.  With this in mind the UN has given today's World Cities day the theme “Changing the world: innovations and better life for future generations” opening the discussion on how urbanization can be used to achieve sustainable development.  At first glance this appears an impossible task but by changing the way new cities are planned, designed and managed and altering the ways in which existing cities are manged and developed we can turn them into a force for good and even increase our greenspace and connections with nature in the process.
Earlier this year London was named as the world's first National Park City recognised for its rich biodiversity, amazing heritage and breadth of cultures. The movement aims to have 25 such national park cities by 2025 where individuals commit to making it better, cleaner and wilder. In the process, they boost biodiversity and improve not only their own health by being more active outdoors, but bring benefits for all with cleaner air, cleaner water and improved resilience against heat and heavy downpours.  Showing that our urban sprawl can also be an integral part of our green and pleasant land.
More about London's National Park City designation and the movement in this article written for CJS in August this year.
UN World Cities Day resources can be found here.