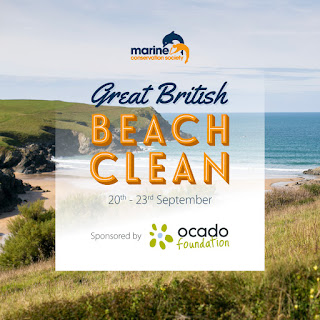 Our iconic annual Great British Beach Clean has been leading the way in tackling ocean pollution for 25 years, helping make some of the most significant impacts on beach litter ever. Along with the very important cleaning, volunteers are also asked to record every piece of litter they pick up which helps MCS in its work to combat marine pollution. The data collected by volunteers has supported incredible changes including the 5p carrier bag charge and the banning of microbeads in personal hygiene products better wet wipe labelling, and supporting a tax on single-use plastic items...every volunteer at the Great British Beach Clean is contributing to real change for our seas!

Last year, 15,000 volunteers took part, removing an incredible 8,550 kilos of litter from beaches around the UK, since the first event we've picked up 319 tonnes of litter. The charity hopes to surpass last year’s record-breaking numbers with an even bigger turnout of volunteers helping to keep the UK’s beaches beautiful.


Lizzie Prior, MCS Beachwatch Officer, said: “Taking part in the Great British Beach Clean really can make a difference. In previous years when we’ve highlighted increases in dog poo bags and sewage related debris found on beaches and seen drops in numbers subsequently. Collecting data on litter across the UK’s beaches is all-important in turning the tide on plastic and marine pollution.”

Cleaning and surveying a beach only takes a couple of hours at most. Each beach has a coordinator who explains how to fill in a simple data form, then it’s just a case of grabbing a litter picker and a bin bag and filling it up with rubbish. Whilst some of the UK’s beaches may look clean at first glance, last year’s cleans found an average of 600 items of litter per 100m of beach; volunteers are sure to find more than they might expect.