You did so well with the beetles

have a worm (nematode?) to identify. 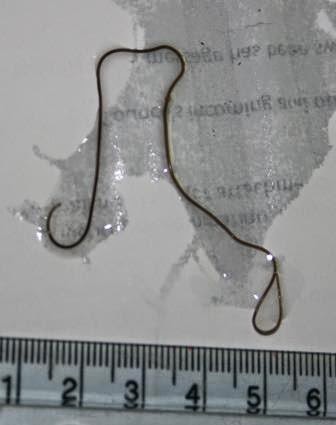 This wriggly worm to be precise.  Last evening as I was pottering about in the kitchen the phone rang, AW with a query about the worm that had just arrived - yes, arrived. The AW family smallholding is on spring fed water collected over the moor and held in two large tanks, it has been raining heavily for a few days so the water is tinted faintly brown with peat; as she was running a bath for the girls out of the cold tap came one dead worm followed by this one which is (or rather was) still alive.  My worm identification skills are even less than those for beetles! but here's what we know: it's unsegmented, pigmentation varies from muddy green to a dark brown, one end is a head with a darker brown colouring as if dipped in paint, the other end has claspers which look a little like lego people hands and in the middle, slightly nearer the head end is a bulge, not a saddle as in true worms but a cyst / egg sack?

Behaviourally it seemed to need water or at least to be moist, didn't seem affected by light (didn't test it for heat or CO2) and both ends moved, the 'head' end more so rearing up and obviously seeking something lifting about a third of its length from the paper.
More hi-res pictures here: number one,  number two, number three (head) and number four (middle)

UPDATE:  We have an identification!
What you have is a nematomorph, or Gordian or horsehair worm.
They are parasites of insects, especially crickets and grasshoppers, as juveniles. The adults live in fresh water/boggy soil. You have an adult, and it is a lovely demonstration of how ecologically clean your water supply is. However it does mean that larger insects may be getting into your supply, so you might want to check whatever filters you have upstream - though the worms are so thin, they can wriggle through small openings.

It is entirely harmless to humans - apart from inducing eardrum inducing shrieks when people find them in their nice cool, fresh glass of tap water.

If anyone else finds one in the bath (or anywhere else!) let us & Mark know.
Email Post
Labels: identification nature notes nematode worm