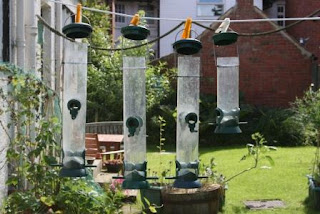 Seeing as we declared last week that Summer had left it was only fitting to give the bird feeders a good scrub, an overnight soak in disinfectant and general clean, repair and tidy up before we get into the full-on feeding frenzy of the cold mornings and darker winter days.  A weekly swish out is fine but once in a while a through scrub and repair session is needed.  A few have been deemed too damaged / not cleanable enough for future use, any reusable pieces have been put on one side and the remainder has, regrettably, been put in the bin. Clean feeders were filled and have once again been a hive of activity we've even had a juvenile chiff-chaff looking at the niger seed which is a first for us.
The garden has also been a haven for the rabbit population - but not for much longer.  Weather permitting the new fence will be installed next week and office dog Hebe will once again have free rein to patrol the boundaries, she reckons she's a rabbitador!
Occasional office hound Finnegan is still not right but is most definitely on the mend, splatting Labradors with his huge feet and galumphing about as usual, just a bit short on energy as he won't (or maybe can't yet) eat full meals of his usual high protein junior hound food.

It looks like a another storm is brewing between the Government and the countryside and conservation organisations.  this week the National Planning Policy Reform has been high in the headlines and yesterday the announcement of focusing the Red Tape Challenge on the environmental / wildlife  laws has already provoked a stinging response from the Ramblers.  To catch up read the news headlines here.
Or if you receive CJS Weekly you'll find part one in Monday's edition. which is now printing, this week eleven pages with 20 new posts 16 of which came direct there are also 15 new volunteer ads.