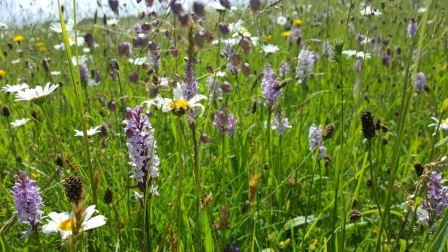 Of the 1500 wonderful, native vascular plant species resident across the British Isles, around 700 of these have been

recorded across our road verges, equating to 45% of our native flora. This includes some exceptionally rare and threatened species, such as the nationally rare Spiked Rampion, an Endangered species in England, whose largest extant population is sited on a road verge in Sussex. Indeed, of the 700 species recorded across road verges, figures by Plantlife indicate that 87 of these are threatened with extinction in the UK, which includes more widespread species. Non-native species mixes are often sown with pollinators in mind. However, this does not account for specialists, adapted to particular species of flowering plant, and typically favours generalists only. Furthermore, it does not consider the specific host plants required by many invertebrates.
Find out more here
Email Post
Labels: ecology native non-native plants