You might have noticed that this year is our 25th birthday. 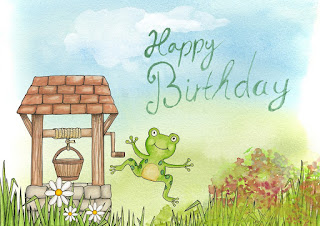 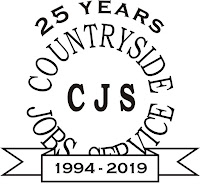 This year is a very special one for CJS, it's our silver anniversary!

You might have noticed that this year is our 25th birthday (no? really? perhaps we should have mentioned it a bit more?!?) - in fact it's actually this week. We've always counted the first edition in July as 'our birthday' edition as the very first Countryside Jobs Service was printed and sent out to readers on 1 July 1994, although being a print edition by first class post most were actually received on Monday 4 July. However, things ran a little more slowly back then, no internet or email just pen and paper (or dot matrix printers) and snail mail.

Earlier this year in conversation with Niall over a cuppa whilst watching the pheasants decimating the spoils from under one of the many bird tables at Groves Bank he commented that I'd been running CJS for longer than he had. It was a total surprise, I had no idea so much time has passed - where does it all go? So we thought that whilst you all know how he and Anthea set up CJS (read January's introduction if you don't) you haven't heard much about how the current Team all came to be here. My story is one of happy coincidence, tinged with sadness, I'd been working at The North York Moors National Park's Moors Centre and bumped into a colleague in Whitby, he said, "you know a bit about computers don't you?, Niall is looking for someone to help out whilst Anthea's not too well." I can't remember who phoned whom but over the obligatory tea and biscuits I agreed to do a couple of afternoons a week and to take over some of the freelance ranger-ing Env Ed as well. Tracey was already doing some of the typing, she'd been doing another job for them when Niall asked if she knew anyone who could type, "I can" came the reply. So Tracey and I learnt the ropes together and filled in whilst Anthea received her treatment - which was so successful they took a long holiday to New Zealand leaving us to our own devices. Before they set off on holiday we had been discussing adding another pair of hands which is where Amy joins our merry little band in another series of odd events. Amy's aunt Jane had the litter sister of my lab and we'd met up a couple of times to talk dog and compare puppy progress (of course); when it became obvious that Tracey and I couldn't carry on on our own I tentatively mentioned it to Jane who thought Amy might welcome some 'pocket money' before she went back to India. So I phoned and Amy came for, yes you've guessed it, tea and biscuits and to see what was involved. Like me she never left!

A few team members came and went but Carla became our next long term recruit. Hers was the very first application we received, within hours of posting the advert, and was early for her interview catching us on the hop but she wasn't fazed by our unpreparedness and confusion or the flood of dogs that greeted her - perfect, she could cope with the general chaos that working at CJS throws at you! A couple of years later the team grew again, adding Katie, whose arrival was relatively uneventful, an application followed by a come and meet the team and have a talk (no tea this time) to see if you're as crackers as the rest of us - apparently she is and fits in perfectly. We're supported by two local businesses providing assistance with the IT and website as needed.

And there you have it - the unorthodox makings of a CJS Team. We bring our own strengths and skills to keep everything running smoothly - at least that's what you see! Tracey still does most of the typing, Carla's great with data entry and posting jobs online, Katie oversees the Training Directory, puts the Weekly together and collates some of the online news, Amy runs the Focus and most of our marketing. I oversee it all, deal with all the little (and not so little) problems, try to keep the harebrained ideas to a minimum, keeping a hand on the tiller steering our little ship into the next 25 years.

We've been asking friends to let us know what CJS means to them and we've been sharing their thoughts with you throughout the year. They've been lovely things to read, it makes it all even more worth while, all collated here and you're welcome to add your comments (email is the easiest way).

We've also been accepting and giving away birthday presents; the Conservation Handbook from TCV and Forestry England membership packages have been exceptionally popular but there's still lots more to come. there's still time to win the Bat Conservation Trust Family Membership and starting on Friday we're giving away CJS subscriptions again, there will be a lucky dip for another 25 annual email subscriptions - one of the January winners got a job and kindly passed on her subscription to a friend, you could do the same. Simply send us your name and email address and at the end of the month we'll pull the names of the lucky winners out of a hat (OK, use a random number generator but you get the gist!). Take part here.

Our new website is almost there - it's proving to be a bigger task than any of us realised but if we can keep the web designer away from Raspberry Pi and lego robots (for school lessons) it will be live soon (or I'll know the reason why…).

Our big announcement for our big birthday is: coming soon.....
(one tomorrow and one on Friday)
Email Post
Labels: birthday CJS25