In 1989 Sir Tim Berners-Lee published 'Information Management: A Proposal' his vision of using hypertext (all web addresses begin HTTP standing for HyperText Transfer Protocol) to allow the millions of computers already connected via the newly emerging internet - but the problem was they all spoke different languages and used different programmes so it was often easier to actually get up and go and ask someone (imagine that!) than try to figure out how their system worked.  Initially his ideas weren't accepted but he ploughed on and created the WorldWideWeb.app, the first web browser; the first webpage was publicly readable by the end of 1990 and the world's first website, http://info.cern.ch, was launched on 6 August 1991. It explained the World Wide Web concept and gave users an introduction to getting started with their own websites.  And the rest as they say is history - and most of it readable on the Web. 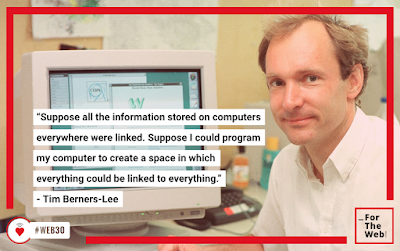 It was Sir Tim's decision that the technology, the software and code behind it would be freely available, and, along with others, he advocated that it should be royalty-free forever which sparked the first wave of creation, this was reiterated in 2003 when developing new standards committed to a Royalty Free Policy.   Continuing with his open access beliefs in 2009, Sir Tim established the World Wide Web Foundation which is advancing the Open Web and fighting to ensure the web remains, free and open.  The web has transformed our world. To mark its 30th anniversary, we’re celebrating all the ways that it has changed our lives for the better and calling for everyone to join the fight to make sure the web is a safe, empowering tool for everyone.

The first CJS website went live in 2000 and is now the main focus of Countryside Jobs Service although we do still have a very small handful of paper editions every week.  So thank you Sir Tim and Happy Birthday World Wide Web.