CJS advertises thousands of jobs every year - but what type of job and where?

In fact during 2018 we advertised 2584 paid roles and published 572 adverts for voluntary roles. It's interesting to see where these jobs are based and what they're doing; so every year we collate the data for some basic analysis to let us see how the sector is changing and for CJS if we're missing any areas or where we should target our efforts in attracting new advertisers. 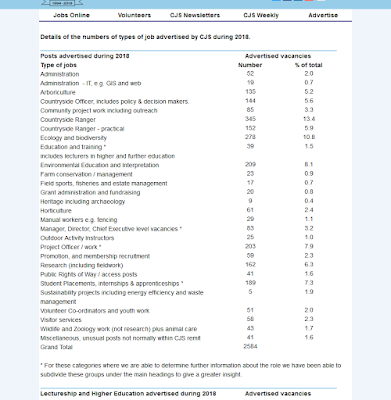 Last year there was a slight change to the job numbers, it was the first time we didn't publish the CJS Digest every week - that's jobs advertised elsewhere. However, that doesn't seem to had an effect on the range of type of jobs: countryside rangers and officers of course form the majority of vacancies although ecology work is increasing every year, education and interpretation remains an important area.  It's good to see an increased proportion of student placements and apprenticeships too.
The one big change that we noticed was a difference in the types of contracts offered with over 40% specifying a contract length. Additionally we noticed a jump in the proportion of jobs that were detailed as temporary or fixed term (not seasonal) at just over a third. There were also enough casual posts for us to record them separately as well, 61 vacancies and 2% of the jobs were only available on a self-employed / freelance basis.  When we first started keeping these records both of these were unheard of neither were zero hours contracts (11 vacancies this year).  However, the regional distribution of vacancies remains reasonable constant with the majority in England but fractionally more in Scotland this year than last.

You can see the basic details on these pages: