Your annual dose of heritage is free this weekend! 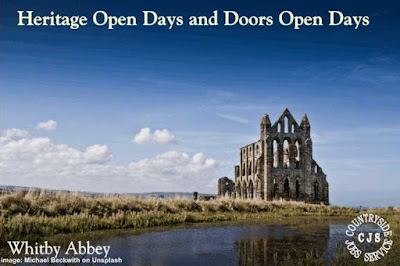 And what better image to use than one from our own home town, Whitby, the ruins of St Hilda's Abbey where the date of Easter (for western Christians that is, the Russian and Greek orthodox do things differently) was set. The Abbey is owned by English Heritage and is normally open most days but between 5 Nov 2018 - spring 2019 the site is closed for a 'revamp' (I'm not sure if the wording is intentional or not being the reputed burial site of Dracula!)

Heritage Open Days is England's largest festival of history and culture, bringing together over 2,500 organisations, 5,000 events and 40,000 volunteers. Every year in September, places across the country throw open their doors to celebrate their heritage, community and history. It’s your chance to see hidden places and try out new experiences – and it’s all FREE.  There are events at many National Trust sites and on National Nature Reserves as well as many churches and old graveyards too and in Scotland they're celebrating Archaeology month as well.

For the first time in its 24-year history, Heritage Open Days – England’s largest festival of culture and history – will take place over two consecutive weekends in September.  This year, in recognition of the centenary of the Universal Suffrage Act, there will be hundreds of events taking place on the theme of ‘Extraordinary Women’ – focusing on both well-known and less celebrated women.
Heritage Open Days is England’s contribution to European Heritage Days, taking place across 50 countries.
In Scotland it's called Doors Open Days and is Scotland's largest free festival that celebrates heritage and the built environment.  It offers free access to over a thousand venues across the country throughout September, every year.  The aim of Doors Open Days is to ensure that Scotland’s built heritage, new and old, is made accessible to people living and visiting the country on weekends in September.

Where can you go?|
Find out what buildings will be open near you (Scotland) here.
Search for events in your area (in England) here.
Other events in the UK Open Doors Days in Wales;  European Heritage Open Days in Northern Ireland and Open House London.

If you're part of a heritage site team and are in need some ideas then have a look at CJS Focus on Visitor Management and Engagement, although it was published a few years ago the suggestions are still relevant.
Email Post
Labels: heritage Heritage Open Days national day