Clear the decks and blow away the cobwebs and help with cleaning up this weekend. 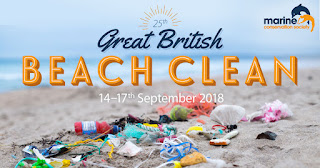 This weekend it's Marine Conservation Society's The Great British Beach Clean the biggest beach clean and survey in the UK.
The information volunteers have collected over the last 25 years has helped make some of the most significant impacts on beach litter ever - the plastic bag charge, microplastics banned in personal care products, better wet wipe labelling, and massive support for a tax on 'on the go' plastic single use items.
But it's not job done. We need to gather more and more data to wage war on other types of beach litter, and you can help. Make 2018 your year to save our seas. Find an event near you.
With support from Waitrose, almost 7,000 people took part in the September 2017 Great British Beach Clean (View report, PDF) at 339 beaches. Let's make 2018 even bigger. 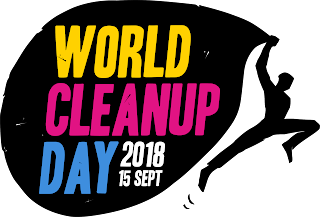 If you're not near a beach then tomorrow, Saturday 15 September, is also World Cleanup Day giving the opportunity to be part of the biggest civic action in human history.
Join millions of volunteers in 150 countries to clean up the world in one day!
Millions of volunteers in a 150-country network will unite to clean the world in a single day.
World Cleanup Day started in Estonia in 2008, when 50,000 volunteers (4% of the population) cleaned up 10,000 tonnes of illegal waste in just five hours. Officials estimated that the initiative saved local governments three years of work and 22,5 million Euros. The idea quickly caught on, and has since been spread globally by the international movement ‘Lets Do It! World’.
Since that first one country cleanup day in 2008, nearly 20 million people from around the globe have joined the Let’s Do It! World movement; connecting and empowering citizens, companies and governments to clean up their countries of mismanaged waste, such as litter and illegal waste dump sites.

By cleaning the world, together we will:
And Make the world a happier place.
Email Post
Labels: beachclean Litter Marine Conservation Society World Cleanup Day