World Ranger Day both commemorates Rangers killed or injured in the line of duty and celebrates the critical work Rangers do to protect the world’s natural and cultural treasures.
World Ranger Day is observed annually on the 31st of July and is celebrated by the International Ranger Federation’s (IRF’s) member Associations, The Thin Green Line Foundation, and by organisations, schools and individuals who support the work of Rangers and the IRF worldwide.
The first World Ranger Day was observed in 2007 on the 15th anniversary of the founding of the IRF.
Let’s pause for a moment to reflect on the sacrifice that these Rangers make; to honour the fallen Rangers and their colleagues who still bravely undertake their role in the field. 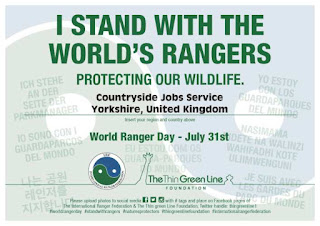 Have fun!  Celebrate your role in protecting the world’s natural and cultural treasures.