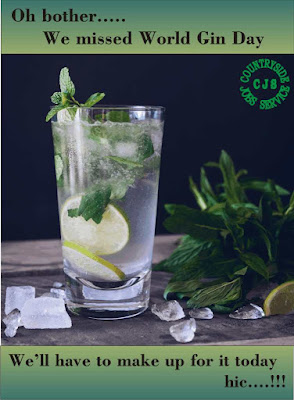 What a disaster, it's Katie's favourite tipple and Amy's partial to a drop or two. I'm not too keen (glass of bubbly for me please) but apparently I should indulge occasionally as it's the drink least likely to trigger hayfever.  Asthma UK say: "Different alcoholic drinks contain different levels of histamine and sulphites, which can sometimes be triggers for allergies and asthma. Red wine and beer are higher in histamine but low in sulphites, while white wine and cider are low in histamine but contain higher levels of sulphites. Spirits such as vodka and gin are low in both, so they may be a better option for some people who experience asthma symptoms after drinking wine, cider or beer."

However, there's another reason why perhaps you 'should' be drinking gin.
As you probably know the distinctive flavour comes from juniper and in the UK although the wild juniper population is classed as 'Least Concern' there has been a significant decline in plant numbers and distribution and more recently a threat from Phytophthera infection, confirmed in Cumbria.  Many of the smaller, artisan gin producers use local supplies of juniper berries and of course are keen to protect their supplies;  some are now actively involved in projects to conserve the UK juniper population and even working on collaboration with some of conservation organisations such as the National Trust and RBG Kew who earlier this year, after a concerted effort, were happy to say: "your gin is safe" because they have successfully banked 5.8 million seeds  from 6500 trees from across the UK making Juniper the first species to be fully collected across the UK.

So what more reason do you need to raise a glass of gin and toast the ongoing success of projects like the Millennium Seed Bank and conservation efforts countrywide.