You were all very kind and kept the office nicely not busy (don't mention the Q word) last week whilst I had a week off work and for once I did absolutely nothing! I sat around, watched a lot of tennis, pottered in the garden, read several hundred thousand words and that's about it.  It was bliss!
But all good things must come to an end and back to work on Monday although office dog Hebe doesn't approve; she took up residence on the sofa and pretty much refused to move all week and now she want to go back.  However, she is a bit of hot dog and is enjoying the sunshine, unlike me, I prefer temperatures around freezing, well, single figures at least (yes, seriously) the muttering starts when the mercury reaches 18. Which means I'm dreading the weekend as there's a heatwave warning out for Yorkshire and the Humber. I really will have to build that walk in / live in freezer.

This time last year I was blogging about our house martin nests being attacked, and in some cases destroyed, by our resident tawny owl. So far this year the owl has stayed away but my poor martins are still under attack, last weekend I found feathers and pair of feet on the drive - sure sign of consumption by raptor. This was confirmed on Tuesday when at just after 9pm battering at the window before settling onto the old phone wire outside my first floor sitting room and directly under the concrete martin nest was a sparrowhawk.  I didn't have my camera with me but I did manage to get this very blurry picture. 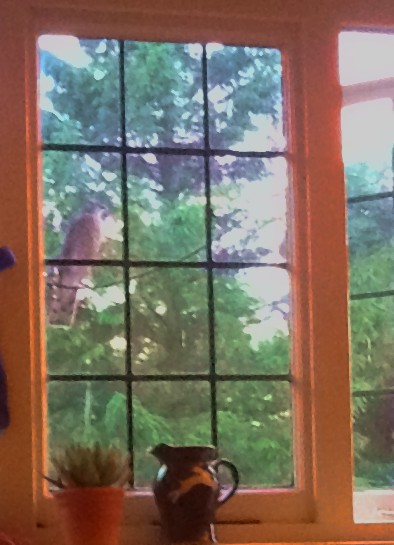 The ipad doesn't take brilliant photos! So this one has been photoshopped to make the hawk a little more visible.

The hawk tried a couple of times and I think also had a look at the other nests on this side of the house, it wasn't in the least bit bothered by the open window or by the dogs watching.  The chattering martin nestlings fell silent and the adults were conspicuously absent for the rest of the evening; however, by morning all was back to normal and the nest was noisy once again.

Monday's edition of CJS Weekly has gone to press, 15 pages this week with 35 adverts for paid posts (29 direct to CJS) plus a further 12 for volunteers.  This week includes the calendar of training and events occurring in September.