From brilliant, if slightly cold sunshine on Monday to snow and blizzard on Wednesday and last night (Thursday) it started raining, this morning we have our very own Arctic complete with ice floe and icebergs!
On Wednesday the weather was so bad we made it into the Telegraph picture gallery with cars and lorries stuck on the main road between Whitby and Pickering, the Goathland lane is in the background of the eleventh image, where the tractor is parked. 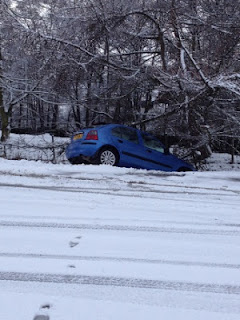 Wednesday was an eventful day for sub-ed HB who on her way home from collecting a prescription took the scenic route down the big hill into the village and her car decided to take a rest in the ditch at the bottom.  She's fine if a little shaken up and the car still works so no lasting damage.
Even before the snow arrived we were struggling with ice, lack of grit on the roads and overflowing ditches, so much so AW was prompted to vent on our Musings from the Moors blog.  Read her thoughts here.
The bad weather has pushed unusual avian visitors into the garden, this week we've been visited by a greater spotted woodpecker who enjoyed the fat balls, a handful of bullfinches who had a little of the ground feeder food, I think the raisins were particular favourites and this morning a jay caused an upset by sitting in the plum tree and shouting.
The anti-penultimate CJS Weekly of 2012 has gone to press, not much news this week so it's quite small at 11 pages but there are 13 adverts for volunteers, 44 for paid posts of which 33 came direct to CJS along with the second pre-Christmas warning.  Digital editions will be available soon.