Skip to main content
Labels
Posted by Kerryn May 07, 2012

Well, it may have been colder than Christmas but at least it was dry.  The sword dance teams  danced around the village, ceilidh'd their way into the early hours of Sunday and even the school children got involved. 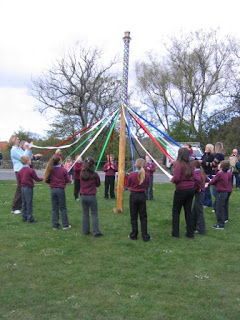 We have a mobile village maypole with various sockets in the village greens.  On Sunday with it being the Mayday Bank Holiday and to join in the dance festivities it was decided that the maypole would be danced around.

Being only a small school Mums (could be Dads too but no volunteers yet, perhaps because there are no swords involved, now that could create a whole new style of maypole patterns) and teachers are required to make sure all the ribbons are used, the resulting patterns are incredibly intricate.  HB is one of the dancers along with Master and Miss B too. 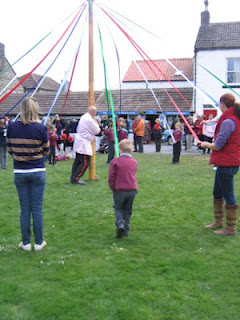 But the pole almost became a victim of the weather, the ground was so soggy that after the second pattern it was obvious that it was leaning quite precariously. Mr B was made to join the dance and keep the pole upright.

So at least one dad was press ganged into maypole dancing!  Maybe he'll have a ribbon next time?