Sorry for the brief hiatus, the blogger in chief has had some time off! So lots of news for you.

First, last week's edition of CJS Weekly was 10 pages with 67 new vacancies of which 29 were sent direct to CJS. As Royal Mail have now ceased Sunday collections this was the first time CJS Weekly was been collected on a Saturday. It would appear that the system was not quite ready for the sudden influx of extra mail on Saturdays with many more than usual subscribers this week reporting non-delivery. Let's hope the wrinkles have now been ironed out and that copies land on doormats on Monday as usual. This week's edition is now streaming off the printers, it's 12 sides of 85 new paid posts of which 34 came to CJS direct from the employer.

You'll find the results of the Subscribers Survey and our responses. A couple of changes are that we're looking carefully at the types of posts we advertise, excluding some we previously included and possibly adding a few ones. We're also reviewing the look and format of the voluntary vacancies. Many thanks to everyone who replied and sent us their thoughts; and congratulations to subscriber 37634 - the lucky recipient of a set of Bird ID Insights cards.

Now, just in case you hadn't noticed Monday is bonfire night (see the article about hedgehogs and bonfires in this week's edition). Being a rural area we're very lucky in not plagued too much by excessive and inappropriate fireworks. But one CJS subscriber has become an unknowing victim. This package was received in today's post: 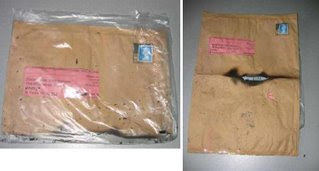 Once opened we very gingerly handled a soggy envelope and extracted the contents which still smell smoky. There was also a note from Royal Mail which states, " The enclosed correspondence intended for your address was unfortunately damaged and recovered in this condition. I would like to assure you that whilst every effort is made to ensure your mail is secure at all times, you will appreciate that acts of mindless vandalism by unknown member o f the public do sometimes occur and are beyond our control." In other words, some idiot put a firework in the pillar box!!

Last week we had to light the wood stove for the first time this year, but then we've let it go out and now have the windows open again, this must be one of the warmest beginnings to November. We've also cleaned all the bird feeders and refilled them and now the garden is full of very hungry birds, they were just waiting, no sooner had the filled feeders been put on the hooks than the first finches arrived – even before we'd got back inside! This year there seem to be more cole tits than before and several large families of long tailed tits have been checking us out but as yet none of the large flocks of siskins that have been reported elsewhere. Several skeins of geese and one of swans (probably whooper but too far away to confirm categorically) have flown over this last few days. Hebe has discovered that she likes bird food and is digging under the feeders for all the scraps, she's not yet realised that a couple of them are within reach – yet….!

Oh, and for those of you worried about the poor traumatized pup - Hebe managed OK during the rugby, we were very restrained despite wanting to scream – it was a try, it was a try (it wasn't but there you go), so well done to the boys for a sterling effort and roll on 2011 when we'll do all again! In the mean time I think we'll have to go with some desensitization exercises prior to the six nations.