Ah, the joys of rural living!

Yesterday morning at nine o'clock precisely the lights went out and the cacophony of alarms sounded before silence fell. There was a rattle, a clunk and a cloud of blue smoke as the onsite generator fired up on the telephone exchange.  We did a few jobs at home and then set out for the day, leaving Goathland in glorious sunshine we headed into Whitby and thick fog!  Despite the inclement weather it turned out to be a good day, sauntering around pretending to be tourists for a few hours looking at all the things we usually dash past in the rush to get the shopping done, chores completed and back home again. Eventually it was time to make our way back over the hill, out of the fog and back to Goathland.  The electricity was due to be restored at 4.30pm, however when the lights were still dark at close to five the analogue phone was retrieved from the emergency cupboard and plugged in and we phoned the number on the letter. Sure enough the rumours were right, it had taken longer than anticipated but they hoped we would be back online at or around five.  Five o'clock came and went and it was still dark so we phoned again, this time to get a recorded message informing us that the power was to be restored at 6.30.  Back into the emergency cupboard for candles and lanterns both battery and gas powered.

The lights came back on just after six to much relief.

Later on catching up on the news I found that Northern Powergrid had tweeted out an update and apology. 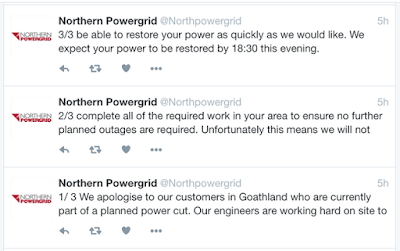 And for people whose mobile numbers they have on file sent a text update.

Unfortunately, when Goathland has no power we have neither mobile phone signal (the mast shuts downs) nor wifi or internet connection!  So no one knew!!