Olympic Torch, a steam train and a few jobs.

The Olympic Flame made its way, or rather the Olympic torchbearer procession made their way to Whitby and hurtled through Goathland on a train this week.
The school children were on the train with the torch which went from Whitby to Pickering, Master B was very excited to be able to touch the torch.  The station master had told the village that the train would be coming through Goathland at 10.50 and although it couldn't stop (not scheduled) it would slow down.  What he didn't say was that the engine was the Nigel Gresley which holds the post-war speed record for a steam locomotive and if it did slow down unfortunately it wasn't really enough to get a good look.  So this was all CMH managed to snap. 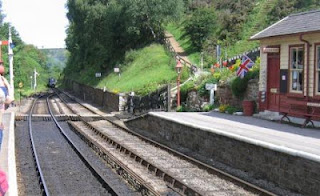 That blue dot in the distance - that's it! 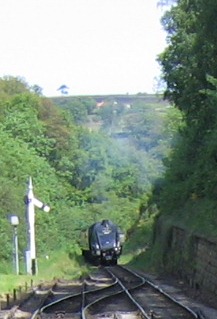 And by the wonders of software here's a close up...


Well, all that excitement was on Monday morning, I think everyone has recovered from the excitement (and disappointment) now.
What was even more remarkable was that it was sunny  - yes look at the pictures again, bright sunshine, light, warm and no rain, even the platform was dry! It didn't last, the solstice (21st) was wet and miserable and today is even worse.  Meaning that once again we're quite happy to in a nice dry office, although I am beginning to despair about the state of my poor garden, puddles and an assortment of weeds. Another edition of CJS Weekly has gone to press, this week 14 pages plus an additional 19 of CJS Focus (more of which on Monday) as well as details of practical work days and conservation tasks happening next month, oh and a few job too, 43 to be precise of which 36 came direct to CJS and 16 adverts for voluntary posts.