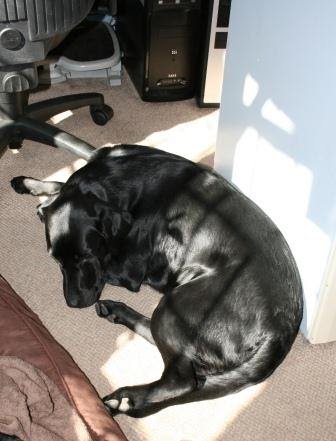 Oh, it's such a hard life being an office dog.  This is Hebe, she's such a sun worshipper she's followed the patches of sunshine around the office today.

We'd all prefer to be outside enjoying this wonderful weather, ah well there's still the weekend (which is almost here - hooray).

Occasional office hound Finnegan has been declared an offensive weapon, having run into KH resulting in a severely sprained finger - it sounds trivial but you try typing when your index finger won't bend and it's taped to the neighbouring  middle one .  So if you've received any emails full of typos - blame Finnegan!


However, the Weekly edition has been proofed and any typos have (we hope) been eliminated.  It is 10 pages long this week with 53 new paid posts of which 40 came direct to CJS.

We had reports of the first swallows last weekend, on the second to be precise and Juno & KH saw their first on Wednesday evening, swooping low over the cricket pitch.  Peacock butterflies have also been seen for the first time this year.