Ah the joys of rural living!

On Tuesday morning Amy was woken in the early hours by various alarms going off, triggered by a power cut.  Still no electricity by getting up time but once reported the engineers came out really quickly and they were reconnected just after nine.  She said: "Apparently a tawny owl was dead underneath the big box thing and it had fused. Poor Tawny. The man says it would have died instantly and it happens sometimes. Thank goodness for the rayburn and the ability to make tea!" A morning without tea just doesn't bear thinking about. 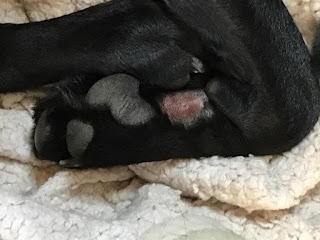 Down the hill in Goathland our little bit of 'excitement' was created by office pup Stella who came back from her lunchtime walk on Wednesday with a slight limp which on investigation turned out to be a blackthorn stuck in her 'wrist' it came out easily enough but she had been plowtering in the gunk at the bottom of the rapidly drying ditches. Although she seemed OK initially by coffee time she was refusing to put paw to floor resulting in, what's turning out to be, her monthly emergency vets visit! She was very good and now has a small hole and 7 days of antibiotics - fortunately being a greedy lab they disappear with her food! 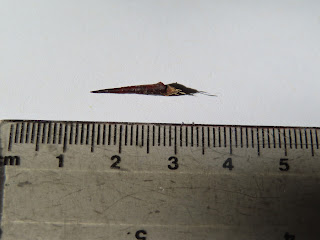