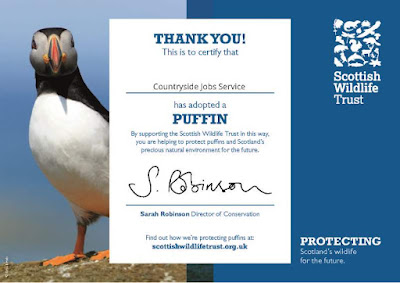 Puffins - how can you not love them with their comical clown faces? Instantly recognisable and much loved but one of the species most affected by climate change and need all the help we can give them. Why little brother? It’s all in the Latin: Fratercula arctica which literally translates as arctic or northern little brother, supposedly named because the black and white plumage looks a like a monk's habit (if you squint) - quite appropriate for our Easter week adoption.

Adopting a puffin was a very easy choice and in so doing we are helping to protect this iconic species and Scotland’s precious natural environment.  The UK is home to 10% of the global population of Atlantic puffins and in 2015 they were added to the IUCN's list of vulnerable species.

You can sponsor your own puffin (or other species) with Scottish Wildlife Trust here  or birds with other county Wildlife Trusts here.

If you missed the survey you can send us your comments, thoughts and feedback at any time, simply email us we really do listen and make changes according to what you've suggested.

See all the sponsorships announced so far here.