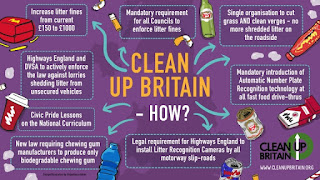 It’s incredibly sad to say, but Britain is the most littered country in the western world.

Clean Up Britain is only interested in finding sustainable and effective behavioural change solutions to the litter epidemic afflicting Britain. Of course, that’s easy to say, but very difficult to achieve. In reality, changing the behaviour of the 20m people in Britain who litter is the only answer. There are hundreds of thousands of very community-spirited people who pick up litter. In the short term, this is great, but it’s also a bit like mopping-up while the taps are still running…. the litter will just keep coming again and again, for ever. Our campaign is about turning the taps off, permanently.