The dance must go on

Whatever the weather; last year in snow this year in near constant drizzle interrupted only by heavy rain! 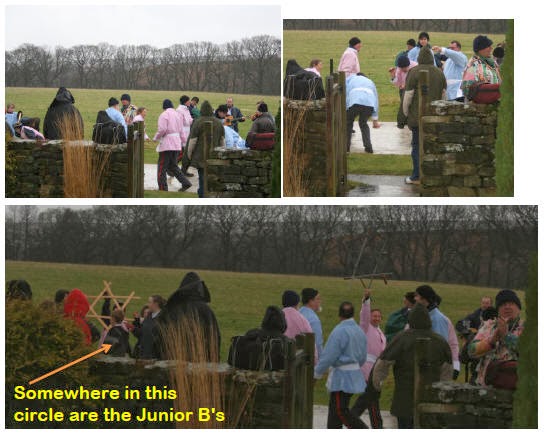 However, stots did their thing, swords were woven into stars, ploughs were not needed to dig up front lawns (I think they'd have got bogged down if they'd tried) and the lake of soup disappeared into cold, wet but mostly happy dancers and followers but HB doesn't think she can face another pan of soup for at least a month or more!

Friday morning and HB and KH are in Australia for the morning - in spirit only more's the pity, one keeping an eye on the yellow fuzzies at the tennis and the other tracking the hard reds with the cricket, small squeals and muttered exhortations were heard as games were won and lost along with damped down cheers when England actually won a cricket match.  Poor AW, she really doesn't 'do' sport.


Two things to note this week:
First - we have a new fax number: 01947 896048 replacing 01947 896474
Second - we have received notification from Royal Mail of changes to postal rates. No indication of what changes just that they will be announced at the end of February and they will come into effect 28 days after that. We've requested early notification and as soon as we know what they're planning we'll look at how that may affect postal subscriptions. As ever if we have to change the rates we'll give you four weeks notice.

This week's edition has just gone print - after a little last minute shuffling (duplicate jobs and an extra volunteer). This week it's 18 pages, including the Training Calendar for March, there are 42 adverts for paid posts of which 23 came direct to CJS there are also 7 for volunteers. Digital editions will be live very soon.
Email Post
Labels: fax number Plough Stots post sport subscriptions