Don't you just love computers?  HB has once again threatened to inflict dire injuries on hers if it doesn't stop thinking and get on and do something - anything - instead of blinking an hourglass! A swift trip to the garden via an open (I hope) window was the most recent insult.  At least on Monday the broken computer was not one in the office rather one at our webhosting company on the other side of the country which was frustrating to say the least as AW tried to get the latest Focus edition out and I was working on the Professional edition but it came right in the end and all hardware stayed indoors.
Yesterday you really didn't want to be outdoors, this was the scene at lunchtime, just before the heavens opened and rain was hurled with great force. 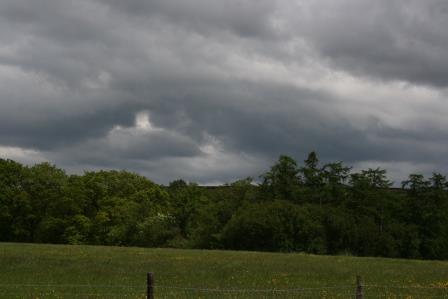 Just look at how green the greens are (no, I've not photoshopped it, it really did look like this!)

So by early evening when it had stopped the air was humid and heavy with midges, I was trying to get some of the garden tubs planted up but after an hour gave up and retreated indoors, even office dog Hebe was pleased to come in.  Later on a large brown-eared bat was having a feast and putting on a wonderful display of acrobatics hoovering up those pesky midges, there are still a lot flying around, and busy biting too, so I really hope he returns tonight for seconds.

Monday's edition of CJS Weekly has gone to press and digital editions are online.  This week there are 16 pages including the Training Calendar for August, 44 adverts for paid posts and 9 for volunteers.