Skip to main content
Labels
Posted by Kerryn May 04, 2012

there really is no other way to describe the weather today and most of the week.  Dull, drear, grey, grizzly, wet, miserable on their own are not quite descriptive enough.

It's rained so much the electric fencing in TB's top field is more than slightly wobbly and on Tuesday she'd no sooner sat down at her desk than the phone rang, "are your horses meant to have the whole of the fields?", "No!".  A quick dash back up to Green End where is seems that Titan had found a reasonably dry patch to have a roll and had rolled into the fence shocking himself in the process and like the race horse he was took off at, probably, high speed for the other side of the fields to escape the violently shocking 'wolf' pulling tape with him.  By the time TB got there all the horses were lying down very happily in the long, lush green.  No one had any injuries (and so far no evidence of laminitis from the excessive amount of super rich grass, phew) but they were very reluctant to be called in even for big rattling buckets of feed, curiosity got the better of them and they were safely corralled whilst the hunt began for the fencing posts which had sprung out of the exceptionally soft ground at high velocity being fired in all directions.  The fence was reassembled and powered up and the now very mulish looking horses were released back into their smaller grazing strip.  And whilst we're on teh subject of akward animals.  Occasional office hound Finnegan caused chaos last Friday afternoon (which was why the blog post was late) by ripping the bandage of his tail and chewing a huge hole in it which then bled copiously, profusely and all over. A hastily applied pressure dressing stopped the dripping and then a swift exit to pay a visit to his favourite vet. He came back with a bigger dressing, assorted medicines including antibiotics and more dressings.  A week later and it's healing nicely and he's able to spend large portions of the day 'undressed'.  But he will insist in clattering it on every surface, corner, person and hard upright within range! 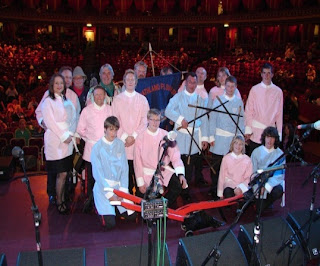 We're really hoping the weather picks up because this weekend the village sword dance team, The Goathland Plough Stots, are having an historic weekend of dance with teams from all over the country.  HB has today off to help with the setting up, so AW's editing the Weekly edition and putting it online too.  This week it's 14 pages long with 43 new paid posts of which 31 came direct to CJS there are also 14 adverts for volunteer placements.  Online and digital copies will be on their way soon, paper editions are printing.
OK now back to the himalya of paper on my desk before it avalanches across the floor...
Email Post
Labels: CJS Weekly Finnegan horses Plough Stots rain weather